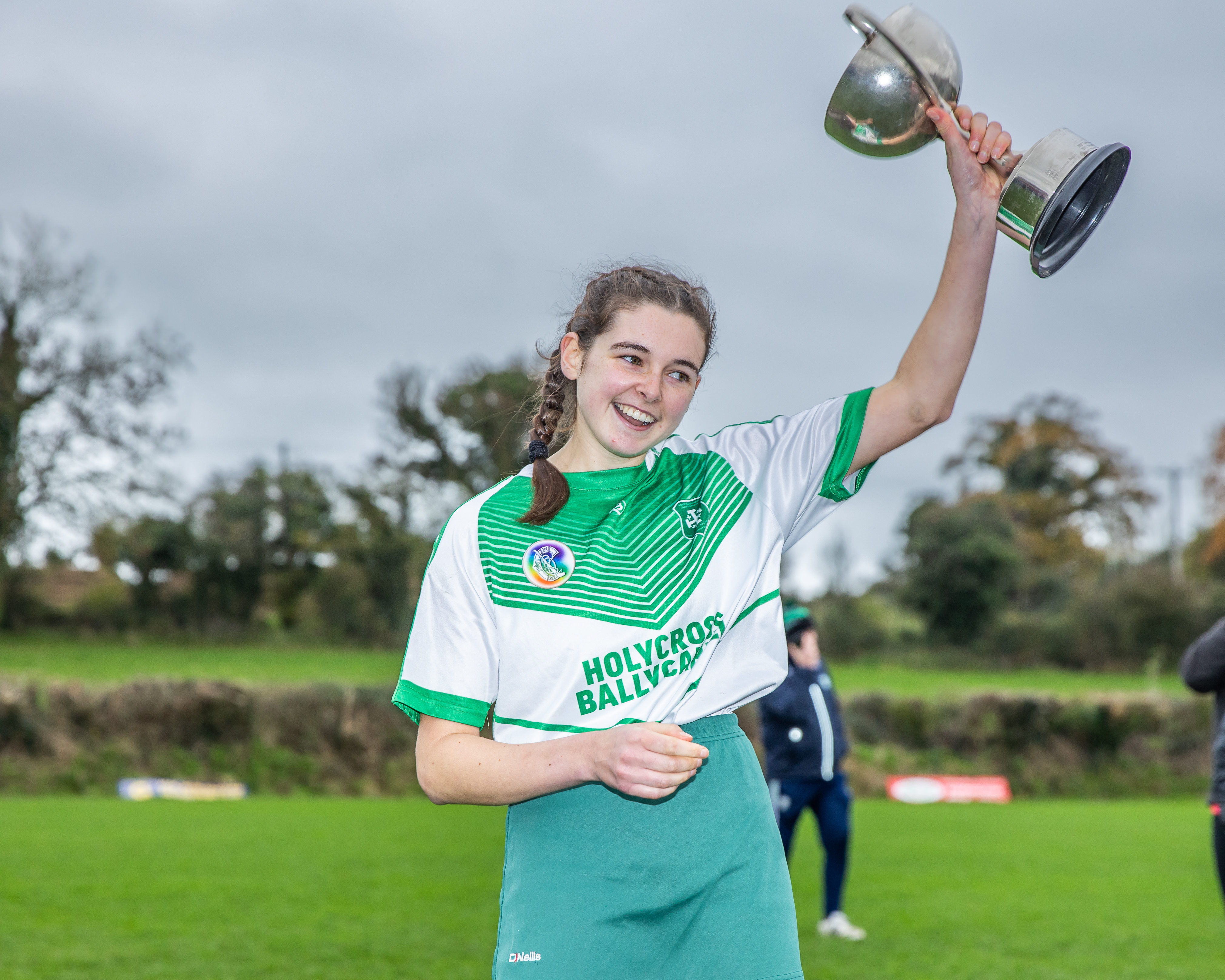 Holycross Ballycahill were crowned FBD Insurance Minor B champions on Saturday in dramatic style after 2 goals in the dying minutes meant they went from 5 points down with 58 miniutes gone to 1 point winners at the final whistle. It was a devastating way for Boherlahan Dualla to lose as they looked to have one hand on the trophy approaching full time. Rarely do replays live up to the excitement of the original fixture but Saturdays final did this and more. The first half was full of quality and great scores with the lead changing hand on a number of occasions. There was less scores in the second half but it had unbelievable drama and excitement in the closing minutes. Meabh Ryan got the opening score of the game for Holycross with a pointed free after 4 minutes. Two minutes later the excellent Anna Murphy responded with a point from play. Boherlahan Dualla had the advantage of the wind and enjoyed plenty  of possession with Lisa O’Connor and Anna Murphy looking dangerous while Paula Quirke started very brightly at centre back.

Two wides in succession meant the score remained 1 point each when Caoimhe Doyle struck for the opening goal to the delight of the large Holycross Ballycahill support. Minutes later Clodagh Morris caught a great ball and off loaded to Elana McGrath who buried the ball into the back of the net making it 2-01 to 0-1. A minute later and another goal this time from Boherlahan’s Lisa O’Connor who showed some lovely touches to  create and finish the goal chance which put 3 points between the sides. Boherlahan then enjoyed a great purple patch with 5 points in succession 2 from Anna Murphy and 3 from Lisa O’Connor. The pair linked up brilliantly for Lisa’s 3rd point after Anna caught the ball straight from a Holycross puck out, passed to her teammate who struck a lovely point to make it 1-06 to 2-01 in Boherlahan Dualla’s favour. A free from centre back Meabh Ryan reduced the lead to a single point at the interval.

Another Meabh Ryan free 2 minutes into the second half levelled proceedings again. Holycross now playing with the wind created lots of chances in the second half but amazingly didn’t score again untill the 58th minute.  A Lisa O’Connor point was followed by a goal from Amy Moloughney who showed great persistence to eventually get the ball over the endline. Holycross needed scores and with Alison Fitzgerald, Miah Bourke and Robbyn Fitgerald powering into the game they went on search of another goal. A brilliant attacking move looked to be yielding a certain goal only for a superb save by Molly Gilmartin in the Boherlahan goal. The follow up shot was again saved by Molly and Boherlahan remained in the lead. More missed opportunites by Holycross as the clocked ticked down and it looked as if Boherlahan were heading for victory. A free each was pointed to make it 2-08 to 2-03 when Holycross were awarded another free in the 58th minute from approximately 30 yards out. Up stepped Meabh Ryan who was excellent all day at centre back and she showed serious composure and skill to rattle the back of the net. Holycross went on the attack again and another save by Molly Gilmartin resulted in a 45m. This was dropped into the danger zone but the Boherlahan defence stood firm and cleared their lines. Possession was won once again by Meabh Ryan who was fouled and on the 64th minute she stood over to take the resulting free. Again she brilliantly landed the ball in and with hurlesy swinging everywhere the sliothar spun into the net as the stand erupted with cheers of delight and disbelief. Moments later the full time whistle sounded and Holycross Ballycahill were victorious after an amazing game.