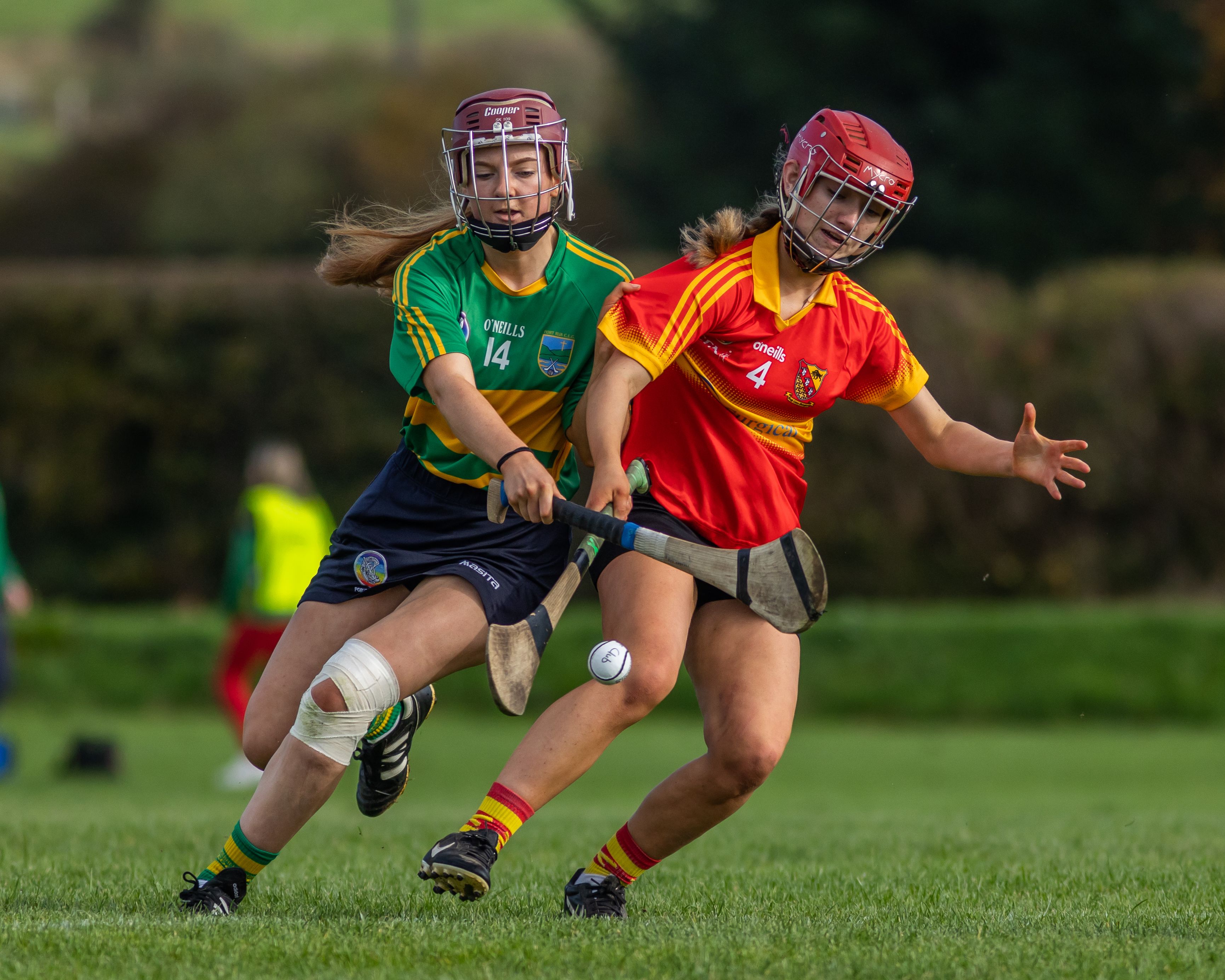 Moycarkey Borris ran out comfortable 12 point winners in Sunday’s FBD Insurance Junior B final to make up for last year’s final loss. Despite the final scoreline, Portroe made life very difficult for the winners especially in the opening half and led by centre back Trish O’Halloran (who scored all Portroe’s 5 points from frees) trailed by only one point early in the second half. A telling switch to move Tipperary U16 captain Sarah Corcoran to midfield at half time worked wonders as not only did she quell the influence of Portroe’s Claire O’Brien who was very good in the first half but she also struck 1-06 (3 frees) to add to her first half point in what was a fantastic individual display. It was a low scoring first half in a lovely afternoon in Sean Treacy GAA with Moycarkey Borris enjoying more of the possession but guilty of some wayward shooting. Cathriona Walsh from play and an Emma O’Sullivan free put Moycarkey two in front before Trish O’Halloran pointed Portroe’s opening free in the 17th minute to make it 2 points to 1. Both sides exchanged further points before half time to leave the score at the interval 5 points to 3 in Moycarkey’s favour. An early second half free reduced the gap to 1 and thoughts were turning to a potential upset on the cards as having beaten Portroe twice this year in both league and championship Moycarkey were hotly tipped going into Sunday’s final. But up stepped Sarah Corcoran who really took the game by the scruff of the neck taking over the free taking duties and also scoring some wonder points from play to put Moycarkey Borris 6 clear (10 points to 4) with only 8 minutes gone in the second half. Portroe continued to work hard in attack fighting for every ball and were awarded with another free to reduce to gap to 5. But a goal from Sarah Corcoran on the 18th minute put the result firmly beyond doubt as Moycarkey began to grow more and more into the game. The half back line of Maria Kinane, Karen Mullins and Amy Callanan were solid throughout the first half but in the second half were excellent launching clearance after clearance into the danger zone. Kate Ralph won a huge amount of ball in mid field while also finishing with 2 points. While Alisha Kearney, Maeve Hackett and Sarah Corcoran were a constant threat in attack. For Portroe Nessa O’Driscoll dealt with every thing that came her way and even managed a half block on a wonderful strike for Sarah Corcorans goal. All 6 of the Portroe defenders worked extremely hard and showed great grit and determination in the tackle. Trish O’Halloran was excellent on frees while also making some crucial interceptions and clearances. Aisling Sheedy at fullback came into her own in the second half. Their forwards struggled to get free from a resolute Moycarkey defence and found themselves bottled up time and again. They did however win a number of key frees to keep the scoreboard ticking over. The winning margin could have been less if a penalty in the 53rd minute was scored but there was no denying that Moycarkey Borris were deserving winners. They have been excellent all year against every opposition and have the players to equip themselves very well next year in Junior A. 2022 has been an brilliant year to date for the club winning county titles in both Camogie and Football. Next weekend their minors contest the Minor A final against Cashel King Cormacs where many of their stars of their Junior B win will go in search again of another medal.