FBD Insurance Adult Championships Round Up 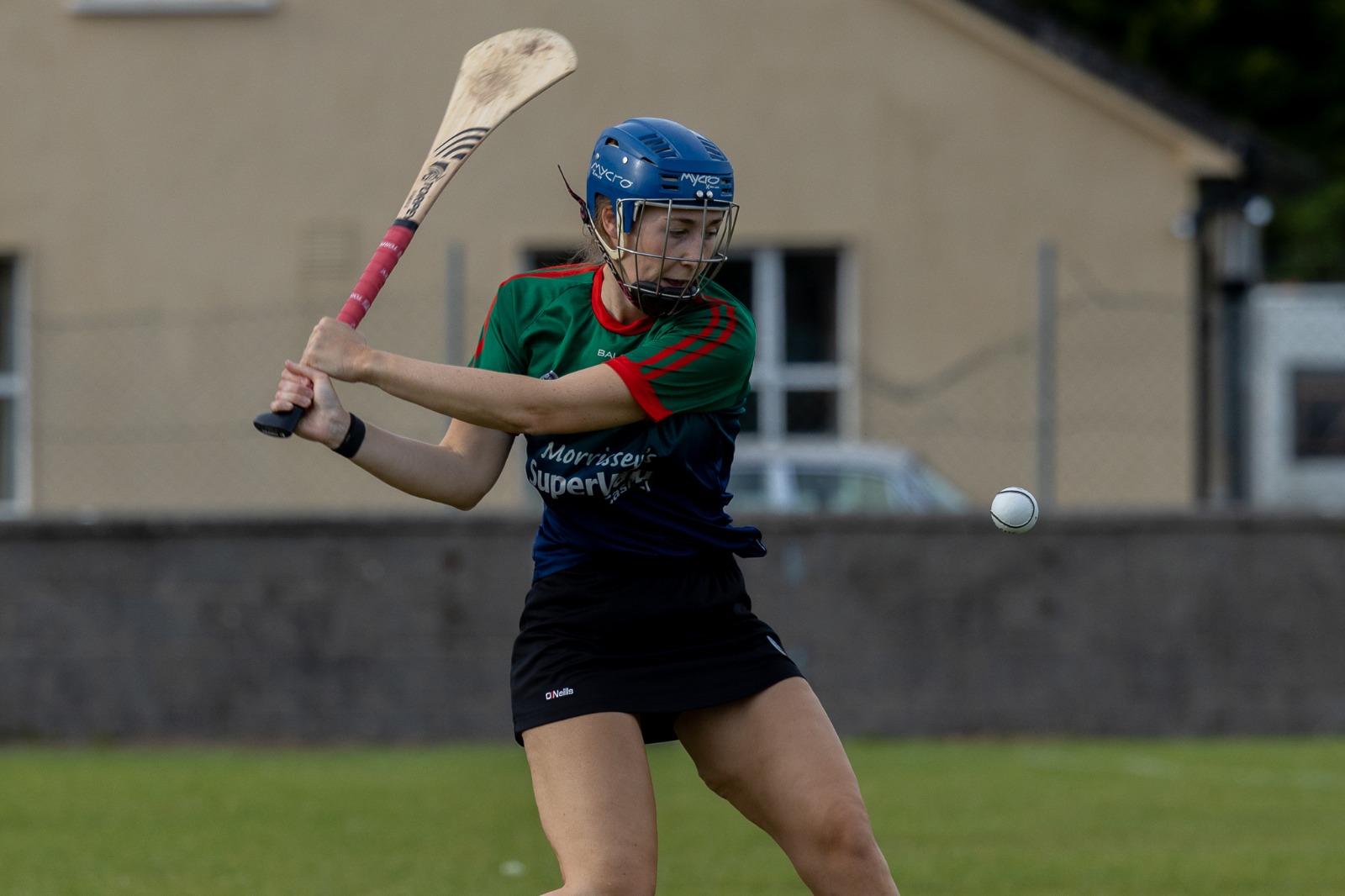 The meeting of Burgess Duharra and Silvermiens was a hard fought game where every ball and score had to be earned. For Burgess Duharra Fiona Kirwan was solid in full back and had a great game. Duharra’s county players all performed well, Ciara Holohan had a clean sheet in goals while Caoimhe Maher and Jenny Grace worked very hard in the middle of the field. Up front Ciara McKeogh and Ciardha Maher kept rotating between the full forward and centre forward position keeping the Silvermines backs on their toes. Iris Grace who was part of the U16 A Tipp team that reached the All Ireland final this year has settled well into her wing back position and had a strong performance. Silvermines never gave up and produced a very good performance making Duharra really work for the win. At half time Burgess led 9 points to 6.  A second half goal from Ciara McKeogh along with the accurate free taking of Jenny Grace helped to ensure victory for Burgess Duharra who will now face Eire Og Annacarty in the county quarter final.

Another impressive performance from Cahel King Cormacs ensured they ran out convincing winners against Knockavilla Donaskeigh Kickhams on Saturday evening in Clonoulty. Cashel were dominant from the start with some excellent displays from, Caoimhe Perdue, Anna Fahie, Lily Fahie and Laura Connolly.  Caoimhe Perdue, Aideen Bergin, Ciara Dwan and Grace Moloney all took their goal opportunities brilliantly in the opening half  to leave the half time score 4-07 to 7 points and the result beyond doubt. With 3 wins and a draw Cashel topped their group earning themselves a direct route to a county semi-final.

After a tough and physical battle of camogie Drom-Inch emerged victorious on a final scoreline of 2-12 to 1-07. The first half was very close with Drom holding a single point advantage 7 points to 1-03. Annacarty’s goal coming from Jean Kelly. Eimear McGrath and Eva O’Dwyer exchanged points from frees throughout the hour while Eimear along with substitute Michelle Woodlock also bagged a second half goal. Mairead Eviston was excellent for Drom at centre back as was Aoife McGrath on the wing while Niamh Treacy and Niamh Long put in a great shift in midfield finishing with 4 points from play. With 3 wins from 3 Drom-Inch go straight into a semi-final and will be hoping to have the injured Mary Bourke and Maria Connolly back by then. Two defeats and a draw means Eire Og Annacarty finish in 3rd spot and will face Burgess Duharra in next weekend’s quarter final.

After a promising start which produced a first half goal from Caroline Browne Nenagh found themselves trailing by 7 points at half time 1-03 to 2-07. Clonoulty’s goals coming from Eimear Bourke and Kate Ferncombe.  Clonoulty's superior firepower and top class play proved too difficult for Nenagh to handle in what was a very one sided second half. All the Nenagh players gave it 100% but it wasn't their best night at the office. Four more goals in the second half including 2 from Cait Devane helped Clonoulty to run out easy winners. As second place finishers in the group they will now face Thurles Sarfields in next weekends’s county quarter final.

FBD Insurance Intermediate  Championship Round Up

Cahir and Newport Ballinahinch met in Cahir on Saturday evening in the FBD Insurance Intermediate Championship. Newport Ballinhainch raced into an early lead and when Grace O’Toole hit the back of the net after 12 minutes Cahir were trailing 1-06 to a single point and looked to be in serious trouble. In an amazing turn of events the goal was the catalyst for a Cahir comeback and with Rosin Howard switched to full-forward she was unstoppable with 2-05 before half time. Carol Casey also pointed to put Cahir into the lead at the break 2-07 to 1-06. Newport used the break to regroup and emerged in the second half with a renewed urgency and fight. Points from Grace O’Toole, Saoirse McGrath and Keeley Lenihan put Newport back into the lead as Cahir started to struggle to win the breaks. Added pressure from the Newport attack resulted in 2 second half penalties. The first was saved but the follow up eventually resulted in an Amy Quigley goal while Grace O’Toole pointed the second penalty. Roisin Howard along with Sarah Finnane and Kate Lonergan continued to work hard but could only manage 2 second half frees resulting in a narrow 1 point defeat 2-10 to 2-09 after an enthralling contest.

Toomevara’s depleted Intermediate Camogie Team battled hard when defeated by a fine Boherlahan team on Saturday. The game got off to a quick start with both teams getting a goal inside the first few minutes.  Boherlahan showed some great camogie displays in the first half with all 6 forwards getting on the scoreboard. Katie Ryan was lethal in front of goal for Toomevara and took her three goals very well. While county player Mags Quigley was a shining light in the Toomevara defence. Jill Anne Quirke and Mary Flaherty were others who impressed for Toome. At half time Boherlahan Dualla led 4-08 to 2-02. Boherlahan pulled away in the 2nd half scoring 1: 4 without reply. The North girls were struggling with girls carrying injuries but battled away and scored 3 second half goals. Boherlahan though had just too much for their opposition and ran out comfortable winners on a final scoreline of 5-18 to 5-04.

The other game in the Intermediate championship was the meeting of Borris-Ileigh and Shannon Rovers in Borrisoleigh. This was another cracking game with huge intensity throughout. After 10 minutes the score was level at 2 points each. Aoife Fitzgerald with the Borris-Ileigh points from play. On the 12th minute,  Ava Bevans struck a superb goal while 3 pointed frees by Emma Maher gave Borris-Ileigh a 1-05 to 0-04 lead at half time. The Borris full back line of Emma Galvin, Niamh McGrath and Jane Delaney were in super form throughout. Both sides traded pointed frees on the 34th and 36th minutes before Shannon Rovers Rovers hit 4 unanswered points (2 frees & 1 x 45) to level up the game on the 55th minute. Jane Delaney was outstanding in defence for the homeside while up front a pointed free by Emma Maher after Dani Ryan was fouled gave Borris the win on a final scoreline of 1-07 to 9 points. It was a very good team performance by Shannon Rovers and they fought right to the end with chances to snatch victory. Their scores came from Aoife McLoughney, Celine Guinan, Laura Leenane and Emma Darcy.

FBD Insurance Junior A Championship Round Up

An excellent second half performance by Templemore ensured they pulled away from Drom-Inch on Friday evening to run out 1-16 to 10 point winners in both teams final group game in the FBD Insurance Junior A championship.  In the other game in the group St Rita’s Fethard started well with a point and goal against Holycross ballycahill however 2 points from Roisin Comerford and 1 from Sarah Ryan saw Holycros Ballycahill narrow the gap. A free taken by Meabh Ryan was won by Sarah Ryan who saw Claire Stakelum free, Claire caught the pass and slotted the ball over the bar to put the sides square. Linda Fanning added to Holycross Ballycahill’s score with 1-1. Fethard respinded with 2 more points to leave the half time score Holycross Ballycahill 1-5, St Rita’s 1-3. Holycross Ballycahill were first to score in the second half when Julie Brennan scored a point. St Rita’s replied with a point. Claire Stakelum added two more points to her tally and Meabh Ryan a point. Towards the closing minutes of the game St Rita’s added another to their scoreline but it wasn’t enough and Holycross ran out 4 point winners 1-9 to 1-5.

FBD Insurance Junior B Championship Round Up

There was 3 games in the Junior B Championship on Sunday evening with wins for St Cronan’s, Portroe and Silvermines. Portroe defeated Carrick Swans at home 2-09 to 8 points. Junior B2 winners from last year Silvermines recorded a 6 point win over Ballingarry 1-11 to 8 points while St Cronan’s defeated Moyle Rovers 5-06 to 2-07.

FBD Insurance Junior B2 Championhip Round Up

In the only game played this weekend in the Junior B2 competition Toomevara’s Junior B2 Camogie team maintained their rich vein of form with a comprehensive victory against a hard working Anacarty outfit. Paula Ryan was very impressive in the Toome goals with Tricia Cleere also superb at full back. Louisa Duff, Therese Maxwell and Sarah Ryan were among the goal scorers. Anna Grace, Samantha Moloughney, Fiona Young and Anna Woods were others to impress in what was a very polished team performance. Final score Toomevara 6-04, Eire Og Annacarty 0-03

*First named team is at home

Cahir VS Borris-Ileigh at 5.30pm