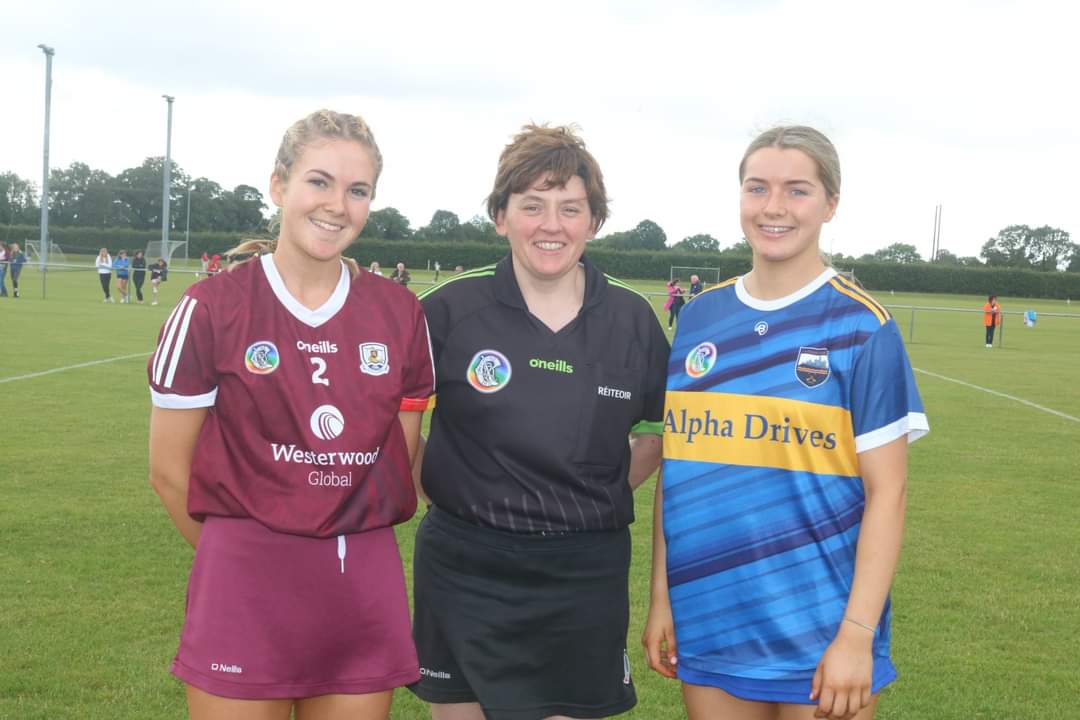 Tesco U16 A All-Ireland Semi-Final

A superb second half performance by Tipperary saw them power into next Sunday’s All-Ireland final. The game was evenly poised throughout the opening half with Sophie Flynn’s goal after 16 minutes the key score giving Galway a one point lead at the break. Tipperary scores coming from Lucy Purcell, Sarah Corcoran, Danielle Ryan and Caoimhe Stakelum. There was a strong wind mainly blowing across the field for the majority of the game but any advantage was going to be Galway’s in the second half. However It was a rejuvenated Tipperary side that came out after the break and substitute Aoife Mellerick along with Eabha Dolan set the tempo early on with some brilliant play coming out from defence. Abbie Massey and Leah Murphy worked tirelessly for Galway out around the middle of the field creating space inside for their forwards but every time Caoimhe Callaghan or Siobhan Carr gathered possession and went on a run they were met by the excellent Tipperary half backline who grew more and more into the game as the match progressed. Moycarkey Borris’s Sarah Corcoran was excellent at centre back coming out with ball after ball. She also scored some crucial frees aswel as a fantatic point from play in the first half. She was flanked on the wings by Alison Fitzgerald and captain Sophie Maher who can both be pleased with the excellent shift they put in. Three points in succession after the restart meant that by the 35th minute Tipperary had gone from 1 point down at the break to 2 points ahead leading 1-5 to 10. A second Caoimhe Kelly point for Galway bought it back to 2 points with just over 15 minutes of action to play. With both teams desperate for a score chances went a begging at both ends with no score until almost the 50th minute when Lucy Purcell took off on a great run from midfield and fired over a great point to make it 1-6 to 11. Lucy along with Paula Quirke were excellent throughout in midfield and had a great battle with Galway’s Ciara McGrath and Emily Brogan. Galway responded with a point of their own to leave just a point between the sides again with only 2 minutes remaining in normal time. A line ball in by Tipperary was collected by substitute Ava Bevans who turned back and gave a lovely pass to the onrushing Ali O’Kelly who fired her shot past the Galway keeper to the delight of the Tipperary crowd. Galway now trailing by 4 points once again quickly went on the attack and Ciara McGrath pointed to bring the lead back to 3 points again 1-11 to 1-08. The Tipperary response was fantastic again with a low ball in by Lucy Purcell finding Ciara Shelly who offloaded to Ali O’Kelly. She immediately went on a solo run and split the post to give Tipperary the all important insurance point and secure their place in the All-Ireland final. It was a fantastic team performance throughout with great heart and determination coupled with superb skill. Special mention to Sarah Corcoran who was magnificent at centre back along with Paula Quirke in midfield while all the subs made a great impact off the bench in particular Ali O’Kelly with 1-1 from play.  Huge credit also to the management team of John Ryan, Tomas Gleeson, John Fitzgerald and Siobhan Ryan in guiding this group to a place in an All-Ireland final.