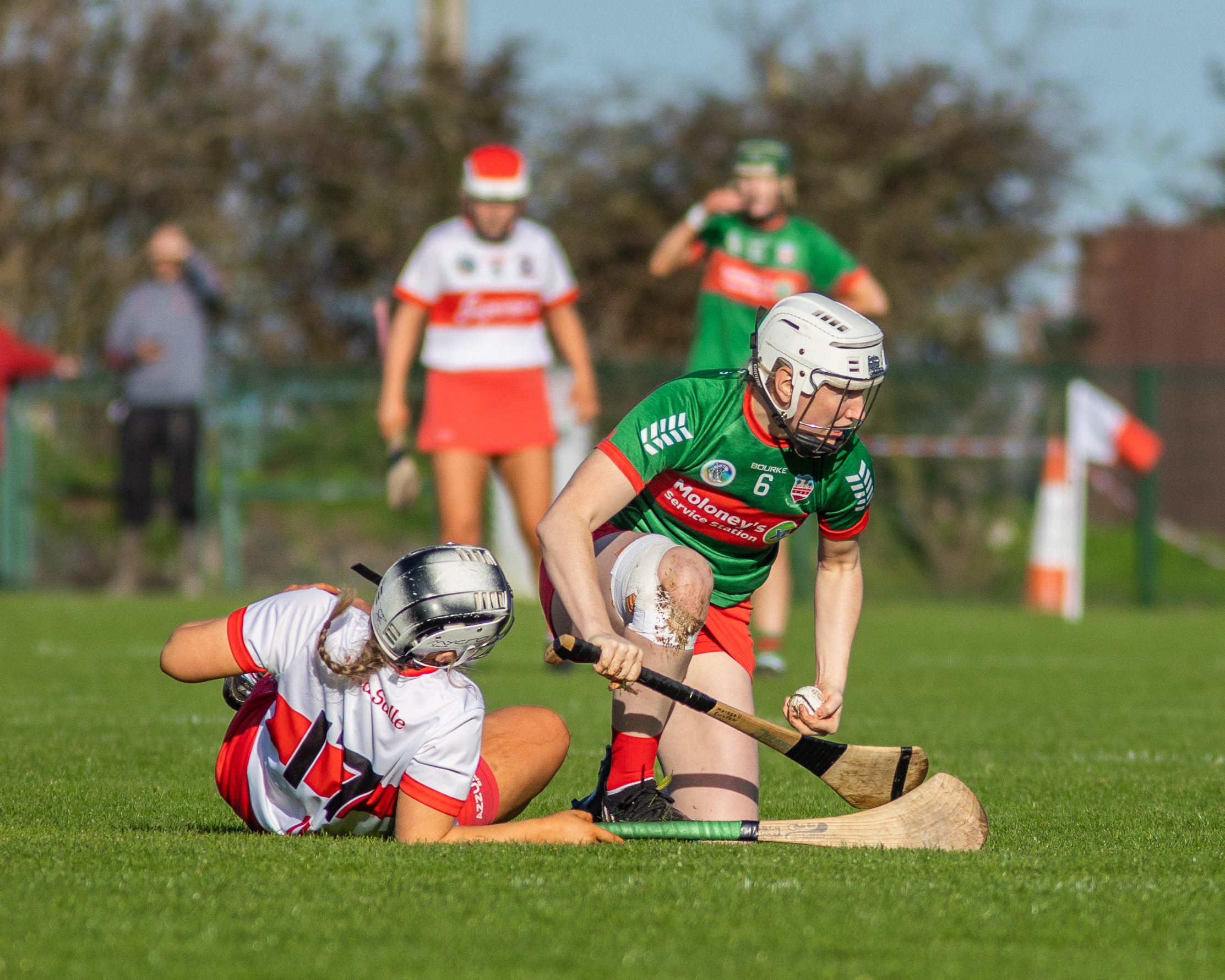 Drom-Inch booked their place in next weekend’s Munster Final after a thrilling extra time win against Waterford champions De La Salle. Playing in their first ever Munster game De La Salle pushed the Tipperary champions all the way but Drom’s experience and fitness stood to them in extra time as they found another gear to finally put a small bit of daylight between the teams and secure the win. A wonder goal from Niamh Treacy put Drom ahead 1-02 to 1 point after seven minutes and they still led at the break 1-04 to 0-06 after a good quality opening half where beth Carton, Maggie Gostl and Abby Flynn traded scores with Niamh Ryan, Eimear McGrath and Miriam Campion. The second half continued in similar vein, played at a great tempo up and down the field in what was a beautiful day in Waterford. Drom-Inch still had a one-point advantage when Eimear McGrath scored an excellent point from a tricky angle to put her side 2 in front 1-09 to 10. The De La Salle response was excellent and cheered on by a great home crowd they hit 2 points in succession from Maggie Gostl and Kayleigh Kirby to level the match for the first time in the 56th minute. Eimear McGrath had Drom ahead again with a point from a free before De La Salle keeper Brianna O’Regan landed a monster free from her own half to level proceedings again. Drom again went ahead from a 45m but a late free on the 63rd minute from Beth Carton (who finished with 11 points in total) meant we were headed for extra time. Drom-Inch got off to the perfect start in extra time when Miriam Campion rifled over a great point. Things got even better when a Joanne Ryan shot from distance floated under the crossbar while minutes later Niamh Long forced the ball over the goal line to raise another green flag after some brilliant play by Michelle Woodlock. This put Drom 4 points clear at the break 3-12 to 0-17 and despite the best efforts of De La Salle in the second period of 10 minutes they could only manage one more point as Eimear Cahill, Aoife McGrath and co ‘shut up shop’ in defence to secure a memorable victory for the 4-in-a-row champions who march on now to Sunday’s Munster final in Mallow at 2 pm against Scariff Ogonnelloe in a repeat of last year’s final.

In very difficult conditions in Coachford on Sunday Borris-Ileigh suffered a 2 point defeat against Aghabullogue to miss out on a place in the Munster final. Playing against the wind in the first half Borris struggled to get on the scoreboard trailing at the break 1-01 to no score. The homeside also struggled at times hitting a number of wides that could have had them further ahead. Cliona Healy who had a great duel throughout with Julieanne Bourke got them off the mark with a pointed free. This was followed by a goal by Julie Tarrant minutes before the break which proved to be the crucial score of the game. Borris-Ileigh emerged in the second half with the advantage of the wind and a renewed determination. Aedin Hogan got the first of her 3 second half points to get the score board ticking. This was cancelled out by an Aoife Twomey point before Borris added two more points from Hogan and Danielle Ryan making it 1-02 to 3 points after 45 minutes. Emma Flanagan then put 3 points between the sides with another point for the homeside. Borris-Ileigh showed huge battling qualities that was evident throughout their county campaign. Points from the excellent Aedin Hogan and Danielle Ryan reduced the deficit to a single point 1-3 to 5 points with 10 minutes left to play. A brilliant Cliona Healy point after 54 minutes put 2 between the sides again. Borris-Ileigh applied huge pressure on Aghabullogue in the remaining minutes in search of a goal that never came. Credit to Aghabullogue they withstood the immense pressure defending bravely until the final minute to secure their spot in next Saturday’s final.