Moneygall are Crowned Junior A Champions 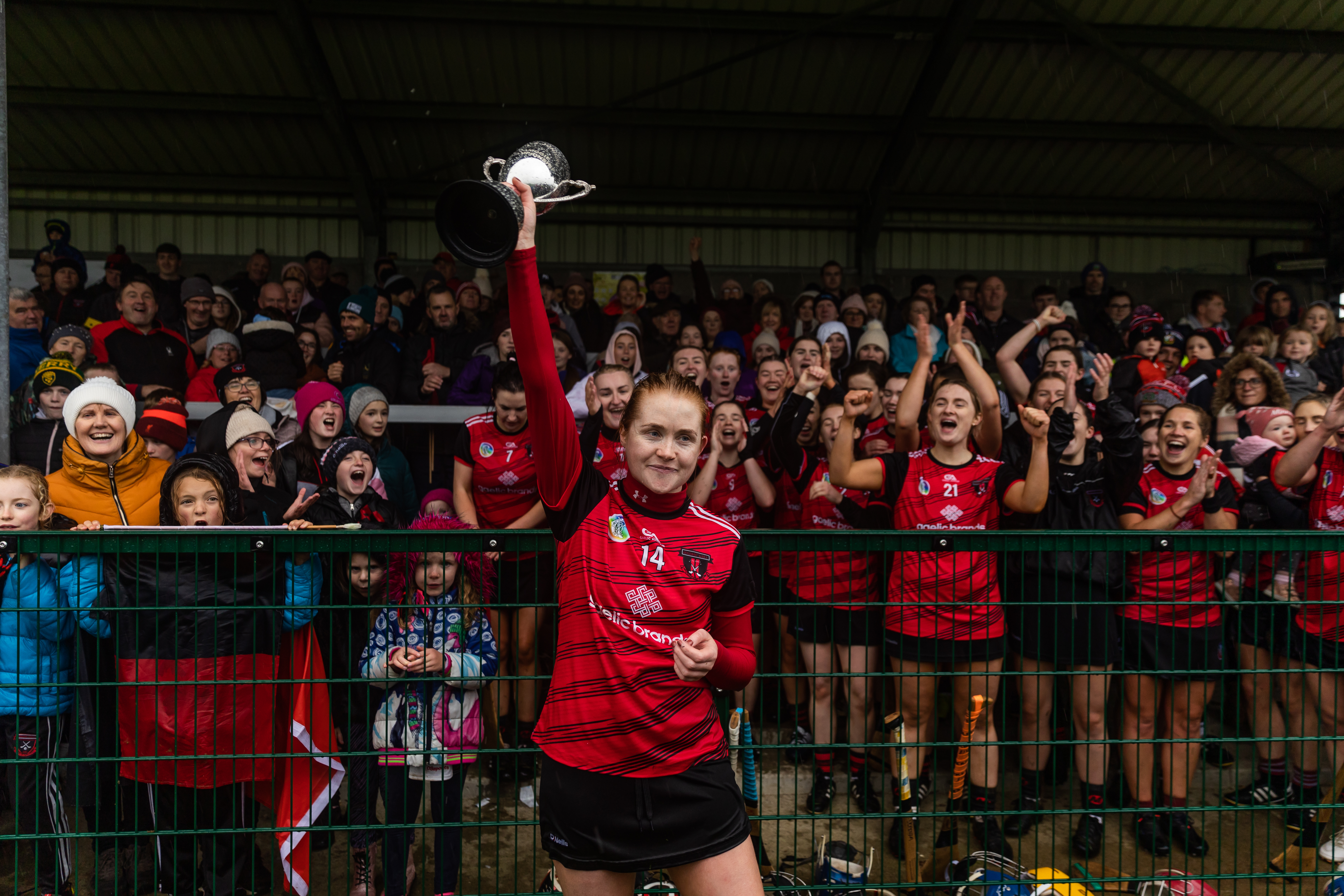 The torrential rain couldn’t dampen the spirits of the Moneygall team and supporters on the final whistle after they ran out comfortable winners against Brian Borus in the FBD Insurance Junior A final. In terrible conditions for camogie Brian Borus were awarded a penalty after 2 minutes when Eimear Myles was deemed to have been held as Rebecca Burke had floated a dangerous ball inside. Kacey Meehan stepped up and buried the ball to get Brian Borus off to a dream start. Unfortunately for Brian Borus though it wasn’t a sign of things to come as they failed to score for the remaining of the half. After a nervy opening quarter by last year’s finalist which included some poor wides Moneygall finally got off the mark with a pointed free from Caitlin Treacy.  From here on in they started to settle and grow more and more into the game with points from Niamh Larkin, Bronagh Kenneally and frees from Caitlin Treacy giving them a 6 point to 1 goal lead after 27 minutes. Two minutes later the classy Mairead Teehan broke onto a ball outside the 45m and burned any defender in sight before blasting her shot passed Alanna English in the ‘Borus’ goal. Another point for Moneygall put them in a commanding position at half time 1-07 to 1-0.

To Brian Borus credit they battled really hard throughout the hour and never made it easy for Moneygall. Caoimhe Ryan pointed early in the second half but on the 39th minute received a red card meaning they were down to 14 players for the final 20 minutes. Bronagh Kenneally who was very impressive at corner forward goaled on the 44th minute to make it 2-09 to 1-01. Immediately afterwards Caitriona Doughan had a goal chance but her shot was brilliantly saved by Alanna English. Mary Ryan then pointed to extend Moneygalls lead. A penalty won by Niamh Larkin was finished by Mairead Teehan before Niamh Larkin had a goal of her own on the 62nd minute to add further to Brian Borus woes. For Moneygall Julie Kelly was immense at centre back while in midfield Mary Ryan and Lauren Maher put in a huge shift and also had a point each. Lauren was a constant thorn in the Brian Borus side with her energy and workrate and after the game was awarded with the player of the match award. Up front all 6 forwards continued with their rich vein of form that had seen them remain unbeaten coming into Sunday’s final. In a difficult day for free takers the young Caitlin Treacy finished with 6 excellent points from placed balls. It wasn’t to be for Brian Borus as they found themselves up against a very strong Moneygall team. They never gave up fighting and this was epitomised by Shauna Maher who put in a huge shift at centre back.